This evening was a interesting conglomerate of emotions for me. I spent parts of last evening and this evening bringing my long-lost friend Felix (a.k.a. my Scion that I crashed last winter) home to my brother's place where it will await our attention. Sitting in that ole' thing brought back a flood of feelings. It's incredibly hard to quantify how I feel about that thing. It was just a car. But so much, SO much more. It was actually like a friend.

It was there on my first date, it took us to Friendly's. It was there the evening I said "Will you marry me?" and she replied "OF COURSE!" It was the toaster, the tissue box, the greatest sidekick. It toted my mountain bike to Millersburg to the trail three times a week during the summer, and to Canton every week where it would pick up a few kids who would go home and boast to their brothers and sisters about how they had a ride in Nic's "Element." It has seen me cry, talk to my self, sing till I was hoarse. It heard me ask God "SERIOUSLY!?" more than once. It held a dozen hour-long conversations with grief-stricken friend, a dozen prayer breaks for a lost friend, a dozen coffee breaks (make that several hundred) for a thirsty friend. Felix was there.

I stood on top of it when my camera needed a better vantage point. I sat on the roof when I was getting gas during those lazy summer evenings when all the people getting gas ask you how you're doing. It took me to Indiana and back without a hitch (and with great gas mileage) every month. It saw the tops of the Smokey Mountains with me; without Felix I would have been totally alone. It's been to Michigan, Indiana, Kentucky, Tennessee, Pennsylvania, New Jersey, Virginia, West Virginia, and North Carolina. Felix got me into my share of trouble ("Where ya headed in such a hurry, son?"), and right back out of it every once in a while ("Well, I'll just write you a warnin").

I cried on the day I found out Felix was probably gone forever. A handful of my closest friends did, too. Felix was for real. Like the Herbie the Love Bug, I suppose.

I could buy another Scion in a few years. I might even get to liking it after a while. But I will never call it Felix. There can only be one Felix, and for now, he's gone. But there is hope. This summer, with a little elbow grease, and a lotta time, he might hit the highway again.

Here's Felix on the day his career ended: 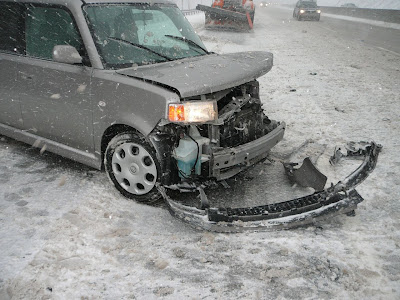