As time goes on, my experience deepens, my opposition becomes more and more diverse, and the jazz resolves itself less and less, my views on certain things become more and more... wide.

Probably I shouldn't use the word wide, rather maybe, different. From many other people, that is. I keep running into situations where people don't understand me because I use everyday terms to go "deeper", but the everday terms do not suffice, or I'm not able to communicate their depth with the context I'm using them in.

Just tonight I was talking to someone, and I was in a situation where I couldn't talk like I wanted to, I didn't know how to talk, rather, how to communicate with the person, because I want to communicate more than our contemporary language allows us. I feel the depths of what I'm trying to say, but I'm not able to convey that with the atmosphere and context of our conversation. I believe it's because of the contemporary lifestyle. I'm tired of it.

What of grandeur is so... grand? What of majesty is so majestic? What of the classical is so endearing? Or is it only me? I can't help but be bugged by our skimming-the-surface attitudes, over-emphasizing things that block or view of the underlying problems. Basically, screaming our heads off at people who scream their heads off, and things like that. Here's a good example. The most-visited part of MennoDiscuss.com is the Theology part. Around twice as many posts as any other subject! I was impressed. Until I looked into it. Indeed, there are a few interesting posts, I daresay, quite a few, but looking at "Is it OK for men to wear shorts?" or "To Tie or Not to Tie?" or "Why the suitcoat?" or, (my personal favorite) "Mennos, Make-up, and Manicures...", I smile.

Now, obviously, we all understand that none of us can picture the perfect church body, or, more specifically, the perfect individual, but how we critique our own culture's essentially non-consequential behavioral habits, standards for "modesty", is just amazing.

In reality, it's only skin deep.

I had an enlightening thing happen to me this weekend; picture this:

Three teenage boys, 16, 18, and 19, in a cabin somewhere off the map, warming themselves in front of a fire, drinking hot chocolate, eating creamsticks, enjoying eachother's company and... reading philosophy.

It actually took place. This past weekend, Chris, Micheal, and I spent Fri. evening and Sat. morning together at a small cabin in the middle of nowhere (and when I say nowhere, it's 4 miles east of New Bedford, that sprawling metropolis built around the 600-643 intersection). When morning came, the fire was out, and the boys were cold. So I got some starter shavings, some dry logs and a match, and warmed that little cabin right up.

While we were all sitting around warming up, it was my bright idea to begin reading from Fracis Schaeffer's book, He is There and He is Not Silent. The boys were agreed, so I began; ended up reading the whole chapter, in fact, and I'll probably never be quite the same.

All that to introduce tonight's subject (if indeed it is night when you're reading this, if not... never mind):

First of all, why does the Trinity exist? What is the need fulfilled by the Trinity? Let's go back a little, to the days of Aerostotle, Socrates (not "SO-crates" as in a movie I recently wasted my time on), and all those guys. The Greek philosophers had this troubling thing; actually, we see it in most Eastern religions who had any brains. The trouble was this:

You know how the Greeks had so many gods? The reason they did this was because the had to have gods in order to be over everything that exists, or as Schaeffer put it, "to be a sufficient reference point for all the particulars." Their dillemma was that they kept thinking of stuff they didn't have a god for, so they'd make another, and another, and another.... We actually see an bit of this in the bible, on Mars Hill, where there was the alter to the unknown god. They always knew they were missing something, so they just made a god they didn't know about to account for their missing stuff.

We know who that God is, but what makes Him a sufficent reference point for all existence and for all our morals? What is special about God that makes Him able to be such a huge thing? Two things: No. 1, He's infinite, No. 2, He's not alone.

No. 1
Of course God is infinite. Just that fact makes him almost sufficient to be our reference point, our validation.

No. 2
He's not alone, for he is Three! He, alone, communes as Three; Three Who loved and communed with eachother before time, before the world began. The reason for this is: if He were alone, He would need the universe as much as the universe needs him! He would have needed the love and adoration of all things as much as they needed His sustaining hand! And if that were the case, He wouldn't be completely sufficient! He would be dependant upon us, humble humans to validate Him! There is no way that my God is not sufficient to live without the earth. It is peaceful to know that my God is completely self-sufficient.

So Jesus intercedes for us, communing with His Father, and the Holy Spirit moves, the catalyst of Christian motion.

I rode toward the edge of the forest at a gallop, the almost-chilled wind throwing my horse's mane into a beautiful flow. I entered the woods at a small opening, where the trees where less dense, and there were clearings every few hundred feet. I was late. Late, not for some event, not for someone, but for the sun. Every spring, when the sun was only so high, it entered one of these clearings, one I had memorized the path to, and glowed off the spring mist that was lifting from the wet forest floor. The leaves in the trees created rays that made the small clearing feel like... heaven. And it was there I was headed, for I was meeting the maker of... heaven.

I galloped on, dodging the trees as they became thicker and thicker, until finally, I arrived. It was just as it always was, just as it needed to be. I jumped off the armoured, battle ready stallion, with a rattle, my own armour making the descent difficult. I left my horse in the darkness of the dense leaves, and made my way to the center of the clearing where I removed my helmet. My long hair, wet with sweat from the ride, dropped almost to my shoulders, and I fell to my knees to begin.

When I did, there was nothing else. No other one. Only I, and my Maker. My thoughts never realised, became words, but neither did they stay in my head. My heart was full. And this was how I spoke.

Silently, I said "Father," then paused my speach to think of the weight of it. Father?

"Worthy, precious, Holy, Being of Love and Grace, here I am."

He approaches me, silent, invisible, but certainly existent. The presence was incredible.

And I begin, the thoughts finally realise, materialise, and I feel them, for I am... Warriorpoet.

In a recent discussion I had with a coworker, Jacob Brown, (partial credit to him for the thoughts that inspired this post) about the debate I had that I posted on this site, we were talking about something that I had said, "Evil is the opposite of Good". I was trying to make a point, but I see now, that I think I may have been wrong. Rather, I should have said, "Evil is the absence of Good".

Similarly, Darkness is the absence of Light, Cold is the absence of Heat (look it up, naysayers), Black is the absence of Color. Makes sense, right? But there's more. When you look at the Biblical account of Creation, where man sinned and was separated from God, we see that man had the potential for evil, right? Not really.

You see, Evil is still only the absence of Good, and Good is only God, therefore Evil is the absence of God. Thus: God didn't create Evil, he created man with the potential for being separated from Him. Angels, too, apparently, as with Lucifer.

Think about it for a while, it may change the way you view certain things.

This morning, I made a visit to the local Bookstore, in response to a sign that said "Storewide Sale"! I went in, and of course, bought something. A Bible. The aluminum, snap-shut cover sported an embossed medical cross wherein are engraved the letters "ESV". English Standard Version. The interpretation of the Holy Bible in the version English Standard. The cover said this: "Herein are contained the very Words of God."

The Words of God? Words?? Language? The communication of an Almighty Diety? In my... coat pocket?

The language of such an Existence, humbling itself to be contained within my hands?! Within my pocket? With the amount of kings in the world that would never allow their subjects to see them without a myriad of red tape, I have a GOD who was gracious enough to allow me to put His Words within the confines of my coat pocket, to view them, memorize them, meditate on them, inhale them, on a whim; no red tape, no introduction, just a pure heart, and a prayer.

That's my God for you. Amazing.

The Lord's Prayer from Luke, in the English Standard Version

Father, hallowed be your name.
Your kingdom come.
Give us each day our daily bread,
and forgive us our sins,
as we ourselves forgive everyone
who is indebted to us.
And lead us not into temptation.

More Photos of the Big Apple 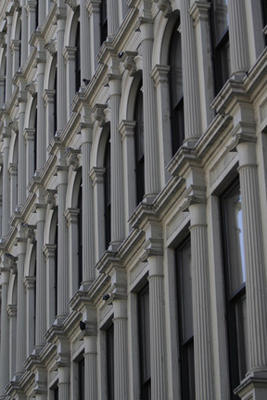 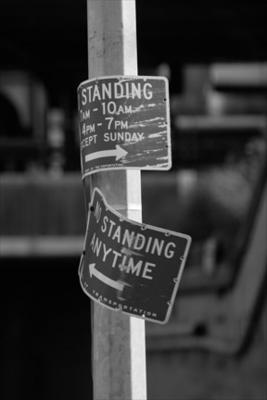 No. 2 Standing in the need of prayer. 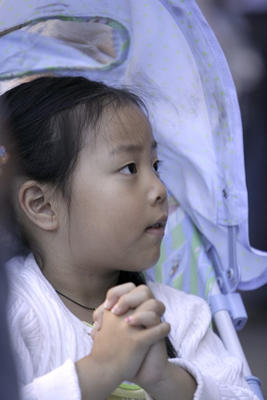 No. 3 I've always had a fatal attraction to Asian girls.... 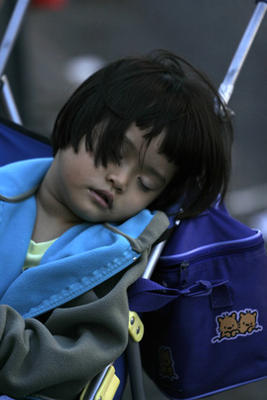