What is the miracle of the virgin birth? According to the laws of science, it certainly is not physically possible. Indeed, it is contrary to any logic one could subscribe to, for when one considers the absence of life leading to it's presence, with only a non-human intervention, it becomes necessary to believe that there IS another world, another existence, one much more powerful than ours, and who's path is not restricted from our own. They can intertwine. And they have. What really took place? Did the Holy Spirit place a living embryo in her womb? Was matter really created, brought forth into existence at that moment? If so, we nullify the idea of having all matter begin at creation, and Solomon's view that there is "nothing new under the sun" cannot be held consistently. The two times that Jesus fed the many crowds of people with only a small amount of food must have been the same way. Atoms, particles, electrons and neutrons, all in conjunction with each other, were brought into being at that moment. The two world's paths crossed, and denied all the conventional idealism that might have existed. God, from nothing, made something. And there is nothing more powerful than that.

For all you techies out there, I just wanted to make you aware of the RSS feeds and email subscription stuff that I don't know much about, I just put in on there cuz it looks cool, and it works, and it was free. And it makes it easy for you to read my blog without having to actually visit the site.

All the links and information are on the left near the bottom of the links section. The icons are mostly links and will help you get started on RSS and so forth, if you haven't already.

Also, as a side note, I'd like to annouce the birth of my nephew, Taras (ta-ROSS) Jamison Miller. Cute little guy.

Though you may detest it (I doubt), I'm going to post photos of NYC, all or most of which are black and white. I hope you enjoy. 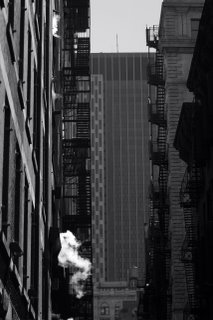 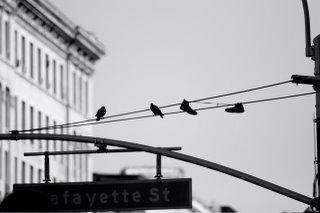 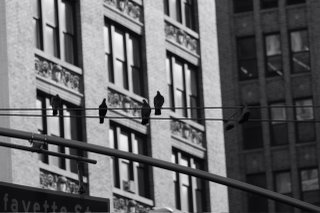 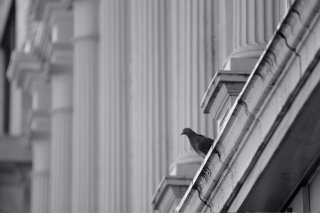 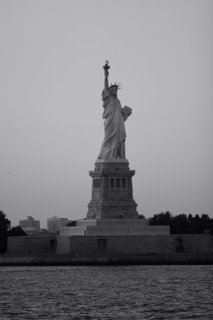 There's a particularly interesting conversation going on at the By-log. A debate about Catholics and Homosexuality is raging in the comments. I think it's extremely interesting. Content Warning: Visit the above link only if you're not embarrassed by casual talk about the scientific basis for human reproduction!

America's Youth and their Clothing Suppliers

OK, folks, how 'bout a little stream-of-conscience post to enlighten the teens.

At any rate, I found that I could hardly bring myself to enter even the most innocent of stores. American Eagle, Hollister, and the like. Because of what I've heard, not seen, I never went into Abercrombie & Fitch. Hollister was bad enough.

All in all, having visited these stores, and few others, I found it awefully hard to keep from becoming intellectually cynical. In fact, I found it impossible.

Hollister is an amazing store. Complete brand identity in only one word: Hollister. It means nothing to me, but to the rest of the teen world, it means everything. So, really, as a marketer myself, I can really respect that. The way they've done up their store is incredible. A real surf shop! But the whole thing was too authentic! It was so poorly laid out, I found that leaving the store required becoming intimately acquainted with a few strangers, the very people I was trying to get away from! And the music created an indescribably oppressive atmosphere, along with the closing-in walls, that made being in that shop nearly claustrophobic. It was insane.

American Eagle. I had to laugh. It was a polar opposite to Hollister. Brand Identity in 2 words, now, instead of 1. (jk) But the store was really boring. I'm trying to figure out if it would be good for business or not. Hollister creates an identity, American Eagle sells. I don't know. It seems to me, in hindsight, that I really don't have a clue what kind of clothes I saw at Hollister, I was too busy analyzing the atmosphere. My graces, it was awful. But American Eagle was less memorable than it's clothes were. I still have flash-backs of khaki jeans, torn, nearly from limb to limb, all in the name of individuality! Ha! It's hilarious just to think about. Individuality, for those of you who think it can be supplied in the clothes you wear, can not be supplied in the clothes that you wear! It certainly can be helped along, but if you're shopping at AE, Abercrombie or Hollister, chances are, you're not!

When describing my opinions to a friend, I thought of an endless plain of fabric (most likely torn fabric) from which all these people were cut. Thousands of youth from all over the world, trying to fuel their individuality by purchasing from the same stores! I have to kinda laugh at the ignorance of it.

Of course, in the end, it's not a battle of which clothes you want to wear that makes me so cynical of the aforementioned stores. As in Hollister, from a marketer's perspective, I think they did well. And AE, making their clothes more memorable than their store, good job. But I can't get past the kind of moral force that they are in our states. Of course, the people that habitually shop there are already exposed to all the sin you can imagine, but: